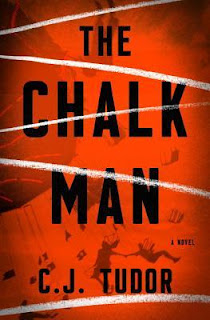 The Chalk Man pulled me into the story from the Prologue on Page 1 which begins "The girl's head rested on a small pile of orange -and-brown leaves."  The narrative then shifts immediately from 1986 to 2016 when the narrator, Eddie "Munster", reflects on the series of horrific events in the small English village that would haunt him and his childhood friends [Hoppo, Metal Mickey, Fat Gav & Nicky] for the next 20 years.

I found the story creative with the characters at 12 years age using bits of colored chalk to send one another messages in code. Each member of the gang used a different color to identify who had written the code. Of course, someone discovered the code and began to create mayhem.

There were a couple of Twin Peaks moments that didn't quite ring true for me; and I did not find Eddie to be a sympathetic narrator. Instead he seems a bit of a creepy, dysfunctional alcoholic.

I also found the repeated reference of a Waltzer confusing since I was unfamiliar with the term. I figured out that is must be a carnival ride. But I had to Google the term for confirm that.

C.J.Tudor is an engaging writer. I found it hard to put down for the first 3/4 of the book. Towards the end, however, the story seemed to lose a bit of steam. Ultimately, the ending for me was a bit contrived and unconvincing.

The Chalk Man is one of the better mystery/thrillers that I have read in quite some time. Despite its flaws, the book is a solid read in the genre and I will happily look forward to reading the next book by Ms. Tudor.

This book will be published in January 2018. I was provided with a courtesy galley of the book through BookBrowse.com  in exchange for an honest review. ****

Posted by Vivian Harrington at 2:40 PM