Todd & I returned last evening from portraying itinerant wet-plate photographers at the 155th Anniversary Commemoration / Reenactment of the battles of Gettysburg in Gettysburg, Pennsylvania.

American Civil War re-enactors traveled from great distances to participate in the event, which tends to attract more participants and visitors on the 5th year anniversaries. Despite the political climate today the event drew more than 6000 participants over the 4 day commemoration.

The security was tighter than at previous reenactments. Deputies with trained dogs patrolled the camps and sutler area. Visitors, sutlers and re-enactors had to present photo identification and wear colored arm bands to identify how they were affiliated with the event. The 2nd South Carolina String Band bid us farewell, while having to explain to NPR representative why their had no qualms playing Dixie at a re-enactment. 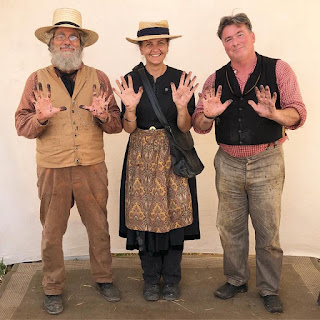 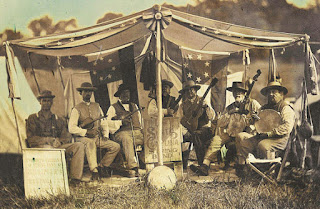 Participants conduct research. They’ve studied the histories of their regiments. They know who died at which battle. They bond while drilling, marching, camping, and cooking over open fires. They share stories. They read diaries. Many re-enact because they want to know, in some small way, what it may have felt like to breach the wall, to hear the cannon fire, to learn how our forebears had to face one another in the heat of battle within yards or in hand to hand combat - what somebody may have felt, in some measure, to see the colors fall and to rush into the void to pick up the flag and run forward into a barrage of gunfire.

Yes, it is play acting. But most of the participants appreciate the sacrifices of those who came before, the ancestors that made a decision to fight for whatever they believed was right. I’ve not heard any of the participants that come to our traveling studio say that they wished the outcome had been different. (that is not to say they do not exist).

But overall, would you not conclude that it is preferable for a young person to discover a love for history and yearn to learn more about our collective past through bonding with those who want to cook the same foods, explore the battle plans of the various historical leaders, to read the actual historical documents that provide the varying perspectives of the actual participants, than to stay inside and play video games?

I spoke at length to a few of young men who traveled to Gettysburg for the event. There was a trio from Mississippi that had an image made including an African American portraying a confederate soldier. These three young men waited for an hour for us to fit them in to our full schedule so they could commemorate their experience. We stayed open after Pickett’s charge, the final battle of the weekend, so we could make images of two men who traveled with family from Washington State to portray Confederate and to fulfill the dream of a high school senior from Key West, Florida - who traveled by train to Gettysburg with his grandfather to serve as a federal soldier.

It is easy to post denigrating comments about re-enactors and reenactments on social media. But try actually talking with somebody who participates and perhaps - if one has even a moderately open mind - there may be greater understanding.
Posted by Vivian Harrington at 8:53 PM