Louisa May Alcott’s Little Women  first captivated my imagination and heart when I was in 4th grade and received a much treasured copy of the book as a gift. Over the years I’ve reread the novel multiple times; and I’ve watched every film and television adaptation- none of which have done justice to the book. I think about the enduring appeal of Little Women, which at its heart is a celebration of sisterhood, family, love, loss and yearning for independence. I find it fascinating that Ms. Alcott disliked her own pseudo autobiographical creation, perhaps because she conceded to having her heroine Jo marry.

I liked Greta Gerwig’s adaptation of Little Women, with the time lines alternating from present to past. Saoirse Ronin portrays Jo admirably with aplomb. Overall, the movie was well cast, beautifully filmed, and as comfortable as spending an afternoon with a group of old friend. And, as customary, tears filled my eyes as dear Beth died yet again. 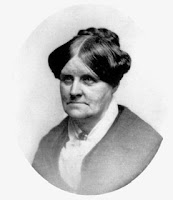 What was overall a positive experience was marred by my constant distraction of the inordinately awful hairstyles of the March women, with the exception of Meryl Streep as Aunt March. Even a family as unorthodox as the March / Alcott family would have followed convention and worn neat, contained, appropriate hairstyles with a center part. In particular, the bushy side parted  bangs worn by Laura Dern and Emma Watson would have been unthinkable in 1860s America.

While I can understand that a director and costumer may want to ‘interpret’ an era, the actors just looked to me exactly what they are.....21st Century women playing dress up. If one makes the effort to use period appropriate candlelight, why not make a modicum of effort with hairstyles? Since there are actual photographs of the Alcott family members upon which the characters are based, it would have been pretty darn simple to get it right.
Posted by Vivian Harrington at 5:45 PM