Glorious Song of Brood X Cicadas as we Emerge from Lockdown 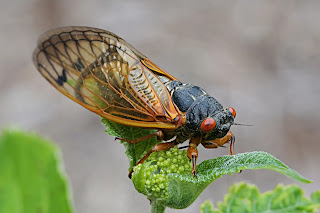 Every seventeen years billions of Brood X (10) cicadas emerge to procreate along the Mid Atlantic. This evening, as I was driving home with the top down on my convertible up Route 522 outside Winchester, Virginia I suddenly noticed the delightful choir of cicadas seeking mates. In areas where these amazing insects emerge, their song can be deafening, often exceeding 100 decibels.

As I roared up to our ridge, the sounds of the cicadas made me feel joyful with the awareness that despite our 14 months of lockdown, the cycle of life continues. Nature prevails yet again and shows us the natural wonders of our world. I first noticed a bit of a roar this afternoon while sitting at my desk with the windows open. I truly thought my essential oils diffuser was making an unusual racket. The sound seemed at a distance. The cicadas have just begun to emerge on our ridge. It is amazing that occasionally I feel as if I can hear an individual song. Could it be?

This is my second experience with Brood X, which last emerged to sing in 2004. I recall then driving along the Baltimore Washington Parkway, the trees dark with cicadas, the thunderous sounds filling the air, my psyche filled with amazement that bugs could make so much noise! My life was so different then.

The thought of these  prehistoric insects connecting us with the past, helping us to celebrate life in the present, and reminding us of the continuum of nature through time, is magical.I’m sitting on my deck with a glass of  sparkling Alsace rose celebrating the delights of all our earth has to offer. I wish more people would stop and listen to the cicadas and forget about politics and dissent for just a while.

Posted by Vivian Harrington at 8:42 PM No comments: 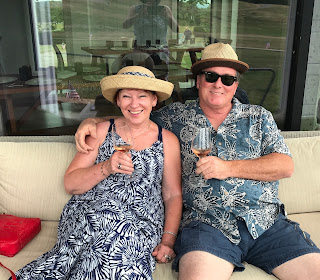 Posted by Vivian Harrington at 7:43 PM No comments: