The world has changed significantly for the better over the past 37years with regard to sexual harassment in the workplace. Those of us who broke through barriers to fill positions previously open only to white men developed thick skins and strong backbones. We laughed at off color jokes, tried to fit in, dealt with wives or girlfriends who hated the fact we were working and drinking with our male coworkers and bosses, deflected obnoxious or stupid comments, worked harder than our male counterparts, prepared responses to those who asked if we planned to quit when we got married or had children, and navigated the challenges of working with support staff who were not accustomed to having women delegate work to them.

I survived, thrived and succeeded in such an environment because my manager was evolved and my determination to rise to the top compelled me to achieve. Furthermore,  I made the decision that I would not allow the establishment to force me out!

Those of use who endured, persevered, insisted on change and stayed the course despite challenges paved the way for women who came after us. We made the decision to fit in, work harder, smarter and better. We exploited the opportunities, embraced every challenge, and paved the way for today’s woman.

We do not excoriate, criticize, denigrate, castigate, denunciate, denounce, ostracize, vilify or smear those men who were faced with a transformation of the world, workplace, or environment they understood. This movement that transformed opportunities for women phased out advantages for men that they had become accustomed to embracing. My brother was once told during the late 1980’s that his chances for promotion were non-existent because he was a middle aged white male. 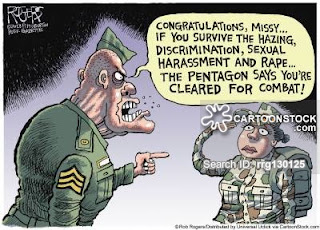 Because I was part of the changes that transformed the workplace, I have a greater understanding of how far we’ve come. 35 years is not a long time in the history of the world which was dominated by men for millennia. To expect a miraculous transformation is short sighted.

Yes, there are predators that continue to exploit power. These individuals should be excoriated or prosecuted if the facts support such. However, there are also individuals who have not progressed, continue to live in a past that no longer exists, and do not understand how the world had changed. If the individual committed a transgression 30 years ago that today would be considered a travesty, we should give some credence to the defense of time and place. It is a different world today than it was in 1980. I, personally, would hate to be judged on my actions of 30 years ago.
Posted by Vivian Harrington at 8:28 PM