What To Do With Family Stuff~

I love George Carlin’s 1986 rant on stuff.  All of us tend to focus on acquiring stuff, storing stuff, displaying stuff, treasuring stuff, and feeling guilty about not using stuff we have. I always wondered why, when my parents reached a certain age, they started to divest themselves of their stuff. Now that I’ve reached the point in life myself, I ‘ve come to understand. I’m ready to pass a great deal of the stuff on to the next generation – if they will take it

I have conflicted feelings about the family heirlooms type of stuff that has been bestowed upon me as a “keeper of the flame” or because I loved the stuff at somebody else’s house or because somebody needs to take the stuff so it doesn’t end up in a Goodwill shop.

Some of the family heirlooms are treasures that I appreciate having. Others are somewhat of a burden – meaning that I love the fact the artifacts survive but don’t really want them. But I want one of my nieces and nephews to desire having the stuff passed onto them.

I love the brass bed that my paternal grandfather kept in his basement, tarnished to a dismal black, with squeaky springs, sturdy and gloriously shimmering when polished. I treasure the water goblets from the Heisy Rose pattern that my mother selected as her wedding crystal. They are the size of modern day wine glasses unlike the 60-year-old wine goblets that barely hold 3 sips. But I love them and want somebody of the next generation to treasure them as I have – not only because of the family connection but because they are beautiful.

My favorite carpets are aged Persians that are lightly frayed and burnished with use. Our fireplace mantel is an antique carved oak piece we found at an antique store in Ohio. We treasure the soft lines of the Hoosier cabinet that houses our spices and light weight dry goods. We love our old things. But at this point in our lives we also seek things that are new and modern, items without handcuffs or strings.

Our tastes have changed. We now crave minimalism. {okay – we do not intend to divest ourselves of our excess cats} But we do want to live in an environment that includes only those items we currently love and treasure and want to surround ourselves with.

So, it is time to make some hard decisions, choices about what really matters.  At the end of the day it is only stuff. Stuff isn’t people. Stuff isn’t love.
Stuff isn’t joy. Stuff does not embody the people who owned it or conveyed it to us. It is stuff, inanimate, soulless, hollow, objects.
Posted by Vivian Harrington at 9:58 PM No comments:

Trust No One by Paul Cleave - A Book Review

Trust No One by Paul Cleave is a fascinating journey into the disintegrating mind of mystery writer Jerry Gray aka Henry Cutter who is diagnosed with early onset Alzheimer's at 49. He decides to keep a journal of his mental deterioration so he can read about who he was as he loses himself.
At times the narrative was challenging to follow. This felt a bit like "One Flew Over the Cuckoo's Nest" meets "Psycho" with a dash of the movies "Memento" and "Away From Her".

The story was creative and engaging, keeping me wanting to know what would happen next, what was real and what was imaginary.I felt compassion for Jerry Gray, but skeptical of who he was and who he had been.

There are twists and turns that I did not figure out until the very end. Then the pieces did seem to fit together.

I was not familiar with Paul Cleave until I read Trust No One, but I will look for some of his earlier works.

Note: I received a pre-release copy of this book to review from Bookbrowse.com
This book will be released August 4, 2015.

Life is Too Short to Settle~

Call it experience, wisdom, unsolicited opinion or communion with the Universe, but many of us who have reached a certain age have accepted that happiness is a state of mind and nobody else can bestow that state upon us.

I reflect on this question because at the moment my husband and I have several friends or acquaintances that are in situations where they are aspiring to make another individual happy. This is the wrong approach in my humble opinion. Instead, I believe the road to peace, serenity, contentment and even happiness is to follow one’s heart, decide what one needs to live a fulfilled life and to refuse to compromise in order to retain, maintain or engage in a relationship.

One of my friends from my former life, Georgy Ziengs, always told me to eat dessert first because life is short. I’ve embraced Georgy’s wisdom and made the conscious decision to avoid compromise when it comes to celebrating who I am at my very core. People either like me or they don’t. I’ve decided to embrace who I am and to share my life with somebody else who will not only accept me as I am but who celebrates me with all of my facets – good, less good, challenging and delightful!

I’ve learned that it is not my place to give advice to others because I do not walk in his or her shoes. But I will encourage my friends and acquaintances to honor who they are, to refrain from settling for what they perceive they want, and to engage in some self-reflection to decide what they really want.

It is heart-breaking to see people we care about suffering because of fear of the unknown, being alone, splitting up financial assets, feeling inadequate or appearing a failure for being unable to make a relationship work.

It takes courage and a certain amount of fortitude to make painful decisions and move on with life. But in the end, it is the healthiest way to life. Life passes in an instant and I intend to live every moment to its fullest. I will not settle!

Posted by Vivian Harrington at 10:40 PM No comments:

Embracing The KonMari Method of Organizing~ 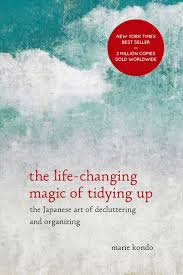 It seems as if I have been on a quest to simplify my life and environment for the past few years and have not achieved even a semblance of success until recently. Despite reading numerous articles about organizing, purging unnecessary items and focusing on keeping only those items that I truly love, would pay to move, or would buy again at full price, I hit roadblocks. 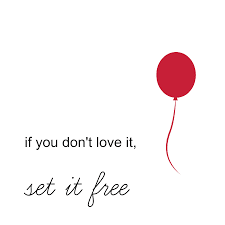 My unreasonable emotional attachment to inanimate objects gave them power over my psyche and kept me from letting go, tossing, donating, or burning. Two factors have given me the wherewithal to rid my closets, cabinets, files, shelves, walls, drawers, cupboards, baskets, bins, and pantry of items, objects, tzotckes, memorabilia, photographs, heirlooms, books and paraphernalia that do not bring me joy.  1) My husband and I are in the midst of home renovations that require us to move furniture and the contents of nearly every nook and cranny to work on various projects. This has revealed the abundance of objects that no longer serve us. 2) on the recommendation of one of my yoga friends I purchased, immediately read Marie Kondo’s book titled “The Life-Changing Magic of Tidying Up: The Japanese Art of Decluttering and Organizing”. 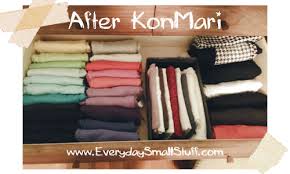 This is a small, hardcover book easily purchased through Amazon.com. But the method of tidying espoused by Kondo can be life altering. Her obsession with organizing led her to conduct research on the subject and ultimately discover that before one can organize effectively, it is necessary to discard anything that does not spark joy in one’s heart.

Kondo explains the roadblocks that have kept many of us from clearing our spaces. These include guilt; feeling the obligation to hold on to a gift we don’t like or to retain family artifacts that just collect dust. She gives us tools to let go of these inanimate objects that are burdensome, bring negativity in our environment, and prevent us from truly enjoying our personal spaces.

It is simple. Objects are just objects. If I bought a sweater that I loved in the store but never wear, the sweater has served its purpose by giving me that moment of joy when I purchased it. I can thank it for its service and toss it.  If somebody gives me a gift that I don’t want to keep, the gift has served its purpose by letting me know the person who gave it to me valued me enough to think of me. I can thank it for that and pass it on to charity.

The book gives instructions for tidying one’s environment in a specific order and in a specific way that may seem completely odd. Start with clothes, then books, papers, etc. until tackling mementoes last. But the method works. I’ve already filled 6 -33 gallon trash bags with clothes and accessories and haven’t completed all of my sub-categories yet.  I actually have space in my closet and my drawers have never been more organized.

There is now space for the positive energy to flow.
Posted by Vivian Harrington at 10:35 PM No comments: