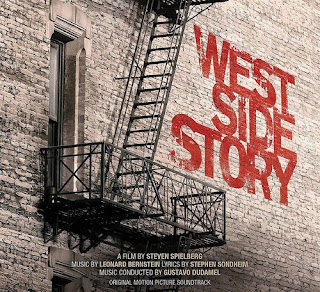 I almost didn’t go. Too many members of the media described Steven Spielberg’s West Side Story as a ‘woke’ retelling of the classic musical, itself a mid 20th century retelling of Shakespeare’s Romeo & Juliet. I’d read reviews that the dialogue had been altered to reflect 21st Century liberal sensitivity. That concept offended my belief in the necessity for artists to push boundaries. And…I believe that enhanced sensitivity has damaged the resilience of the American experiment.

Just at the right time, Turner Classic Movies broadcast the 1961 movie version of West Side Story. Once again I was mesmerized by Leonard Bernstein’s score, Stephen Sondheim’s lyrics, choreography by Jerome Robbins & script by Arthur Laurents. 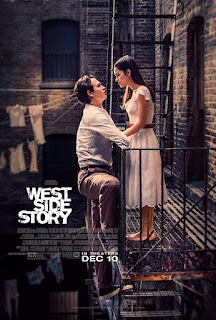 The dancing! The music! The lyrics! I couldn’t get the songs out of my mind. The ear worms cycling through my brain kept me awake~ Something’s Coming, Maria, The Jets Song, America, Tonight!

Yesterday I went to a matinee at The Alamo Drafthouse. It serves really good draft beer. I had the time wrong and arrived just as the movie started. West Side Story 2021 maintained the feel of 1957 New York with a top notch cast, glorious dancing, and the music as memorable as ever. Yes, there were. Ganges to the script; but that did not distract in anyway. And newcomer Rachel Zegler was a new perfect Maria.

I would watch it again. If you love musicals and have the opportunity to see this in a theater, go. This West Side Story is glorious on the big screen.

Posted by Vivian Harrington at 6:03 PM