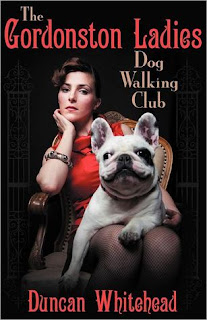 This was a pleasantly quick read, something appropriate to take to the beach or on an airplane. I really wanted to like the book.  It started off well and then devolved into a series of unbelievable coincidences that eliminated any semblance of believability.

The story felt contrived and over plotted. Even in the most melodramatic soap opera one would not find so many connivances.

At the center of the narrative the widowed members of the Gordonston Ladies Dog Walking Club meet daily in the local park to walk their canines, enjoy an early cocktail disguised in red plastic cups, gossip about their neighbors and mourn the expected loss of founding member, Thelma Elliott, who is dying of cancer and leaving behind an attractive, soon to be eligible widower, who is slated to become prey before poor Thelma breathes her last.

Peripheral stories involve an unemployed Englishman with off-shore bank accounts who cares for his baby while his wife works as a nurse, a dumb as a box of rocks woman who works at the makeup counter at Macy’s and dreams of becoming a model and constantly enters contests, an elderly man who never uses the poopa scoopa to clean up after his pooch and the matriarch of the dog walking club with a secret room that not even her deceased husband or maid could enter.

The entire story could only work as a screwball comedy from Hollywood’s heyday.  For me it just didn’t work as a murder mystery, a sociological study of people or any other genre.  It was ok.  But I wouldn’t encourage anybody to rush out and buy it.
Posted by Vivian Harrington at 5:04 PM