It never occurred to me that at some point in my life I would be discussing, much less writing about, my visit to a gun show. Granted, the event I attended was not such any gun show – it was the “Crown Jewel of Collectors’ Shows” presented by the Maryland Arms Collectors Association, the Original Baltimore Antique Arms show held at the Cow Palace at the State Fair grounds in Timonium.  Apparently this show has been presented annually since 1955.

The fact this event is held is Maryland is even more noteworthy to many than my attendance at such a function.  The state of Maryland, of which I was a one time resident, is often referred to by supporters of the Second Amended as The People’s Republic of Maryland not far behind New York in its attempts to become a nanny state.

But, I digress. I actually enjoyed my first two hours of the show, which had for sale or display an amazing array of antique firearms, swords, accouterments and military uniforms from the Revolutionary, 1812, Indian, Civil and world wars.
Unlike modern weapons, the craftsmen of days gone by created weaponry that qualifies as works of art.  I even bought raffle tickets for a beautifully ornate silver inlaid hand crafted Pennsylvania longrifle. It was a bit too ornate for my husband’s taste, but I appreciate the beauty and craftsmanship of the gunsmith. Other Kentucky rifles that stirred my soul are those crafted from curly maple, a lovely wood that would set hearts afire in any piece of furniture.

I enjoyed looking at the ceremonial swords on display, a drop dead gorgeous embroidered 18th Century frock coat, and adorable sets of muff pistols. But for the $5000 price tag, the ivory handled set of muff pistols would have gone home with me! I didn’t even know they existed until last Saturday.

The most striking item at the show was a glass-encased dagger displayed as an 1840 Medici Dagger. Now, this one clearly had not belonged to one of the infamous Medici of Italian Renaissance fame. But it was a thing of beauty – sterling silver with an emerald and pearl encrusted hilt. That was worth the price of admission. I’d love to spray luminal on it to see if it was ever used for its intended purpose…now that was a way to fight a duel! 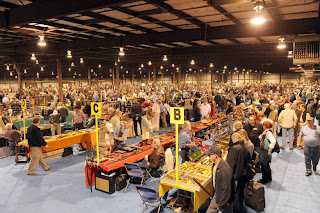 Posted by Vivian Harrington at 7:19 PM