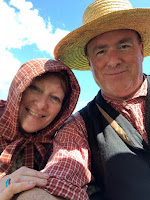 The multidudes of Democrat candidates seeking the party nomination have clearly stated that they want to take more money from the working people who pay taxes to redistribute to people who do not. Yet, they purport to represent ‘working Americans’. Amazingly, these politicians fail to differentiate what they consider a ‘working American.’

The current crop of politicians and liberals refuse to acknowledge the very foundations of the ethic that the original settlers subscribed to for survival. Those who do not work do not eat. This was the philosophy of Jamestown & the Purtitan Massachusetts colony. The community required every member to contribute. This is the very foundation of the American way. No handouts for those who do not contribute.

The early immigrants to our shores braved unfriendly seas, disease, hardship, an inhospitable land, 17th Century technology, the unknown, and a high likelihood of premature death to carve out a life free of religious or political oppression.  Nobody gave them anything.

Nobody owes any of us anything except the rights enumerated in the Bill of Rights. This does not include FREE benefits paid for by one’s fellow citizens. Instead, one is entitled to freedom of speech, freedom of religion, freedom of assembly, freedom of press, the right to own arms and other freedoms SPECIFIED by the Constitution. If it isn’t mentioned, it is not a right.

If Congress wants to create another right, such as a right to healthcare, draft a Constitutional amendment that requires ratification by the states. Until such time, additional ‘rights’ do not exist.
Posted by Vivian Harrington at 8:12 PM