If Democrats Truly Supported Diversity, They Would Step Down 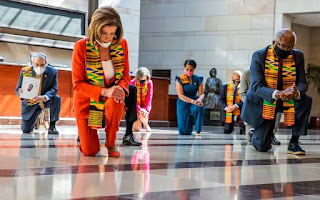 If white Democrat members of Congress truly believed in embracing diversity, each would agree to establish a date to step down and spend the interim mentoring a person of color to replace them in the next election cycle. The fact they have not made such a commitment, suggests their recent actions are merely political theater meant to pander to a constituency that democrats rely upon for maintaining power.
The most senior members of the Democrat Party in Congress, Nancy Pelosi and Chuck Schumer, donned shawls made of Kente cloth, which is associated with Ghana, while they knelt on the floor of  the US Capitol building for eight minutes and 46 seconds to show solidarity for Black Lives Matter. However, this same cadre of hypocrites has spent the last 3 1/2 years wasting taxpayers' money in the singular effort to remove Donald Trump from office rather than working together with Republican colleagues to shore up the country's crumbling infrastructure, which would provide jobs for millions and increase each worker's standard of living. However, cultivating divisiveness has been the object in order to regain and retain political power.
The writings of George Orwell have never been more timely, despite his death in 1950, within a year of publishing 1984. Consider  his observation  that "No advance in wealth, no softening of manners, no reform or revolution has ever brought human equality a millimeter nearer."  This is essentially because politicians, once they have achieved power, do not want to relinquish it.  No matter how much the Democrat leadership preaches to its own choir, they do nothing to actually create more diversity within their political party. If they truly believed in promoting diversity, Joe Biden and Bernie Sanders would not be their most viable candidates for the presidency. The septuagenerians running the party would retire and support the candidacies of a new generation.
Posted by Vivian Harrington at 12:44 PM