The Declaration of Independence - Have You Read It? 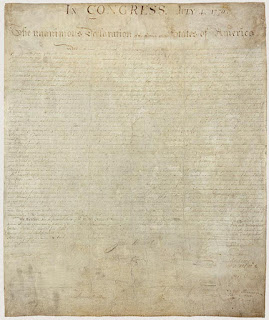 Over the long Independence Day Weekend I watched the musical 1776,  the mini series Sons of Liberty, and James Cagney as George M. Cohan in Yankee Doodle Dandy (which despite some offensive depictions that would not be acceptable in the 21st Century celebrates patriotism as few other films). We Americans must recapture our patriotism for this beautiful country. Despite its flaws, there is truly no other place on earth that affords its people even a scintilla of similar liberty. Those that dishonor our flag,  show disdain for our national anthem, and advocate for lawlessness denigrate the brave men who wrote and signed the Declaration, the farmers who fought for independence from the British, the representatives of the 13 Colonies that compromised on values to form a more perfect albeit not perfect union, the abolitionists, John Adams who argued the Amistad case, George Washington who inspired and led an army composed of volunteers, the black soldiers of the 1st Rhode Island, Connecticut and New Jersey units that fought in the Revolutionary War, Abe Lincoln, Frederick Douglas, John Brown, Harriet Tubman, the federal soldiers who fought and died in the Civil War, the 54th Massachusetts  unit of black volunteer soldiers, the American soldiers who fought in the wars of 1812, Mexican,  Spanish American, WWI, WWII, Korea, Vietnam, Iraq, Granada, Afghan, and who serve our interests throughout the world. Read the document that set us on this path. And reconsider  your allegiance to this amazing land.

Posted by Vivian Harrington at 8:45 AM