What’s In A Name? The Washington Football Team 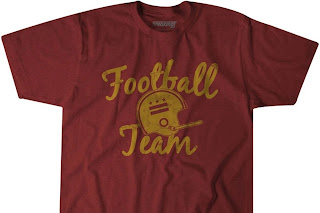 It isn’t that I dislike professional football, although I prefer live games to watching on TV. I actually held season tickets for the Indianapolis Colts for several years before they had a successful season. Other than Darrell Green, who played years for Washington, the era of free agency destroyed any sense of team consistency and cohesiveness.
Based upon my history of apathy interspersed with active dislike, I really have no “ skin in the game” so to speak regarding the team name. Frankly, the entire decades long brouhaha is a bit mystifying. Somebody can find a way to make any name offensive. The team name and mascot was intended to honor the fierceness of Native American warriors and foster a winning spirit.
But times have changed. The woke culture finds offense in the Betsy Ross Flag, Mount Rushmore, the Constitution, freedom of speech, and anybody who doesn’t vote for a democrat.
With these thoughts in mind I’ve come up with several ideas 💡 for names to succeed the Redskins for the Washington Football 🏈 Team which more accurately represent the raison d’etre of our Nations Capital, which is alleged governance:
* The Legislators
* The Witch-hunt
* The Back Stabbers
* The Politicians / the mascot - a large rat
* The Swamp
* The Weasels
* The Do Nothings
* The Hypocrites
* The Pork Barrels
* The Charlatans
* The Mighty Obstructionists
* The Sanctimonious
* The Self- Righteous
* The Partisans
* The Lobbyist / the mascot- a bag full of money 💰
Well, at least I had a bit of self-amusement with this🤣
Posted by Vivian Harrington at 3:15 PM