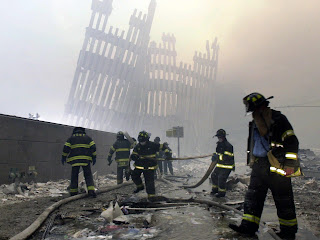 20 years ago tomorrow the concept of the invincibility of America changed. For the first time since Japan attacked Pearl Harbor on December 7, 1941, we were attacked on our soil. People who hated America just because of who we are flew planes into our iconic landmarks in an attempt to cripple our way of life. They did not succeed.
In the midst of the horror we watched on our TV screens or in person, we found heroic deeds, actions, and people who gave us the temerity to move forward, do the next right thing, consider our collective resilience and humanity, and embrace life. Thinking back on that time when we came together as members of the human race, it mystifies me that forces have torn asunder that unity we experienced in a national tragedy.
Twenty tears ago we hailed the heroism, sacrifice, bravery and commitment of our first responders who ran into the valley of the shadow of death to save others. There were no stories of fire fighters or police officers making decisions on who to help based upon sex, color, race, creed, national origin or physical capabilities. Those first responders who climbed the smoke filled steps towards the fire while carrying 70 pounds of equipment saw only humankind.
The passengers on Flight 93 rushed the flight deck to preserve symbols of our independence, liberty, freedom and way of life.
Those who surged into the Pentagon to rescue those who serve each of us exhibited the best of who we are.
Those of us who watched those planes fly into the twin towers, drove by the gaping hole in the Pentagon, who called friends or family hoping somebody answered, who listened to the recordings of the voices of the brave citizens on flight 93, cannot fathom how our media, political class, activists or colleagues could bury these memories to the extent that we have become so polarized and judgmental of our fellow man.
Stop. Reflect. Remember. Celebrate a time when the forces of evil united us. Remember when our friend in France shouted Je Suis  Americain! 🇺🇸
Posted by Vivian Harrington at 9:44 PM