“Arguing With Others Is Folly”~ Robicheaux by James Lee Burke 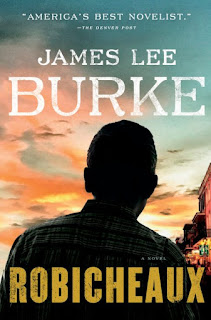 When I began reading Robicheaux this morning, James Lee Burke’s 21st novel involving his iconic alcoholic lawman with demons, nightmares from Vietnam and growing up poor in the bayou of southern Louisiana with his commitment to justice for the downtrodden, I felt as if I’d reconnected with an old friend. I first met Robicheaux in 1993’s In The Electric Mist With The Confederate Dead and have indulged in reverie with Dave and his best friend Cletus Purcell for the past 25 years. David Lee Burke’s writing is lyrical, poetic and mesmerizing with the feel of Spanish moss dripping from live oaks, the sounds and smells of the bayou, and the mystical visions of the long dead, as if they still walk among us.  Unlike many authors who have written series, Mr.Burke remains at the top of his game at 81.

In the first chapter  of Robicheaux, Dave reflects, “ Like many my age, I believe people in groups are to be feared and that arguing with others is folly and the knowledge of one generation cannot be passed down to the next.”  In the current political climate this truly resonated with me.

Be it mental health issues, gun control, defense of the 2nd Amendment, conservative, liberal, progressive, libertarian, immigration reform, cats vs. dogs, parenting, historical context, personal responsibility vs. the nanny state, or any other topic upon which people vehemently disagree, I’ve come to appreciate that no matter how salient the points, well documented the facts, or persuasive the rhetoric, my arguments will not convince those who disagree with my beliefs to change their minds. Conversely, those who take a position opposite of my beliefs will not succeed in altering my views. The 24 hour news cycles and social media have given anybody with an opinion a platform from which to preach, which has polarized the nation.

Nor can we truly share the knowledge of life’s experiences with a younger generation because the knowledge gained through experience cannot be taught. It is impossible to impart to a young person what it means to go to sleep at age 25 and all of a sudden awaken at 45, wondering how the years passed by so quickly, barely remembering some experiences that were life altering at the time. One cannot explain how life throws us curve balls, knocking us off one path into the weeds and that it is sometimes necessary to trudge a few miles or years in the weeds before we find another path, how strongly held beliefs gradually change through the years depending upon experiences.

Anger is too much with us in the 21st Century. Argument or debate can be a healthy way to exchange ideas or at least help others to understand another’s beliefs, position or understanding. However, the anger that appears to fill people today seems all consuming, perpetual, blind, closed minded, strident, divisive, and unproductive. Perhaps it is folly that I have enjoyed being a bit of a protagonist; however, I am well aware that I’m unlikely to change anybody’s mind. Perhaps this is a reason that my old friend Dave Robicheaux’s wisdom affected me.

Posted by Vivian Harrington at 1:47 PM