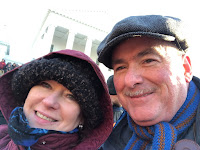 The current election cycle should not be based upon hatred of a particular individual. Politicians do not need to be likable or appealing to be successful. They only need be competent. I do not like the personality of Donald Trump. He is crass. But he is no more harmful than many other presidents. I prefer an abject capitalist over a socialist any day. I remember the Cold War. I Remember  the Iron Curtain. I know people who survived Stalin, Pol Pot, Mao, Castro, Tito, Gaddafi, Amin, Brezhnev, pr the many other dictators or oligarchs of my time. Give me a president who bolsters the economy and tries to limit China’s efforts to steal our intellectual property any day over a bleeding heart socialist trying to abrogate my rights & confiscate my earnings to support somebody who doesn’t pay his or her way.
Posted by Vivian Harrington at 10:20 PM