Triumph Over the Demon Swinging Bridge After 48 Years of Angst!

Triumph Over the Demon Swinging Bridge After 48 Years of Angst! 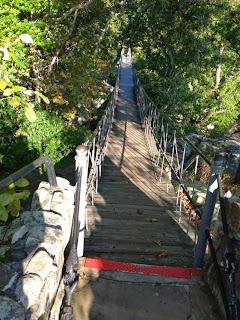 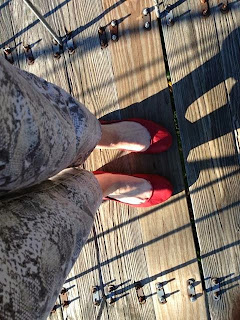 For most of my life I’ve had of fear of bridges. Fortunately, the fear has not translated into a phobia that adversely affected my ability to enjoy life. However, it has caused psychological angst since childhood.

It all started when my parents decided we were ready for a family vacation circa 1965. One facet of the trip involved a visit to Rock City at Lookout Mountain. It was the cite of a Civil War battlefield and developed into a tourist attraction that straddles Tennessee and Georgia.

Rock City is an attraction that screams 1960’s kitsch. (even though the current incarnation was designed in the late 1920’s). There are gnomes, an ode to Grimm’s fairy tales, and mazes through rocks that do not cater to horizontally challenged persons or 21st Century proportions.

When I was a wee child of 6, the parental units brought us to Rock City, which includes among its features a rickety swinging wooden bridge across a gorge that allows the viewer an intimate close up of the dangers of falling to one’s death.  My younger siblings, ages 2 and 4, were protected from falling into the abyss by our parents, who clearly decided I was expendable. I was forced to walk across that swinging bridge alone, fearful of plunging into nothingness. This created a fear that stymied me for nearly five decades. I feared crossing bridges. The instability of bridges scared me. Fortunately, my desire to reach a destination caused me to press on despite the angst.

But I never forgot the fear brought about by that crossing. I felt resentment that my siblings were apparently more valuable. And I knew the only path to sanity lay in facing my fears. However, we live in the Shenandoah Valley of Virginia – which is not within spitting distance of Rock City.

Amazingly, we were presented with the opportunity to visit the area in conjunction with the 150th Anniversary of the Battle of Chickamauga.  My husband and I attended the commemoration and took wet plate images of the living historians who came.

My husband decided it was time I faced the demons and crossed that darned bridge as an adult. So yesterday morning we arrived at Rock City ready to do battle with the bridge. My spouse intended to memorialize my journey with a video recording from his iPhone. He planned to jump on the bridge to make it sway  as I crossed. But I was determined to eradicate the source of my bridge angst. I approached the bridge, started across, felt the vibrations from my spouse’s self entertainment, and sauntered across will nary a moment of discumbobulation. I made it. Then I walked back to the center and photographed my feet in the middle of the bridge. I conquered the fear, faced the dragon, met the hydra and moved on.
Posted by Vivian Harrington at 10:49 PM