A Book Review: Henry and Rachel by Laurel Saville

If the entire book were as beautifully written and engaging as the first few chapters, this would have rated among the best books I have ever read; but, the story did not hold up for me.  And ultimately, I ended up flipping through the pages of the second half of the book just to get through it.

This historical novel is based in part upon the stories Laurel Saville heard about her maternal great-grand parents and some family letters.  The primary setting is Jamaica in the years just prior to and after WWI, the Jamaica in the waning years of English colonization dominated by class distinction and race discrimination.

The saga of Henry and Rachel is told through the eyes and narratives of those closest to them.  Unfortunately, I didn’t really like any of the characters. I believe the author wanted the reader to feel compassion or empathy for Rachel. But I found her a distant, bitter woman who made decisions that were unhealthy for her children, which resulted in their being completely dysfunctional.

Laurel Saville’s style of writing flows as if written by the loveliest fountain pen of old. In the first chapter in which Henry remarks upon  “the inexorable passing of the years that has turned me inexplicably into an old man” touched me in the depths of my soul.  I wish I could say I loved the book; but I didn’t. It was okay; but it didn’t make my heart sing after the 5th chapter.

Disclosure: I was given a free copy of this book to read through Bookbrowse.com. First Impressions. The title will be released by the publisher on October 15, 2013. 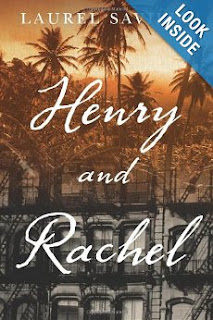 Posted by Vivian Harrington at 6:37 PM