As I was driving to my yoga practice after work this evening my radio was tuned, as customary, to NPR. “All Things Considered” interviewed a woman who had written a book about her memories of the Khmer Rouge regime under Pol Pot in Cambodia and her earliest memories at the age of 5 of her father being taken away for execution.  The interview was broadcast in conjunction with the news that 83-year-old Khieu Samphan and 88-year-old Nuon Chea were convicted of crimes against humanity in a Phnom Penh court. These two men were senior members of the regime caused the deaths of nearly 2 million people 30 years ago. 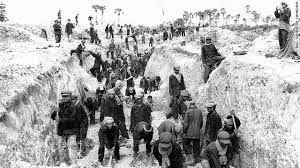 While the Holocaust of World War II remains at the forefront of teachings about atrocities committed by man against man, there have been other more recent examples of atrocity, genocide and man’s inhumanity to man that has received far less recognition by the western media, the intelligentsia, politicians and history books.  One of those episodes in our collective history is the killing fields of the Khmer Rouge in Cambodia under Pol Pot between 1976 and 1979.  The Khmer Rouge forced the urban citizens and the educated of Phnom Penh into labor camps in the countryside and starved them to death.

If you have never watched the movie, “The Killing Fields”, which was based upon the experiences of New York Times journalist  Sydney Schanberg and the struggles of his colleague, Cambodian citizen Dith Pran, who was portrayed in the movie by a survivor of the camps, Haing S. Ngor, who earned an Oscar for his portrayal of Pran,  I urge you to do so.  Dr. Ngor was later murdered in a home invasion in Los Angeles. I still recall the sadness I felt when I heard the news.

I’ve never been to Cambodia (although it is on my bucket list), but I have been within 10 kilometers of the border while visiting Viet Nam and cannot fathom the horror experienced by Cambodia’s people. The photographs of the atrocities are heart rending. I remain disturbed that the western media and politicians have given short shrift to the crimes committed against people that are not of European decent. While I do agree the horrors perpetrated upon the Jewish people during the Nazi era were unconscionable I cannot accept that the atrocities committed upon Asian and African citizens are any less compelling.

But today upon hearing about the conviction of these Khmer Rouge criminals in a court with the backing of the United Nations, I felt a glimmer of hope. I was also filled with sadness for the tragedies of the past and the visions of the bones left unburied in the killing fields. At least today, 30 years later, there has been some justice.