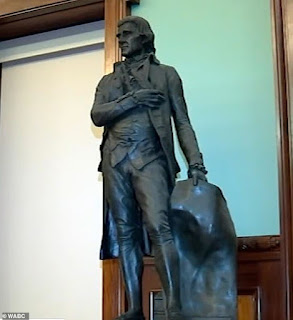 New York City ‘officials’ have decided to remove a statue of Thomas Jefferson, the author of the Declaration of Independence, one of the founders of our Republic, the founder of the esteemed University of Virginia, the author of the Virginia Constitution upon which the Bill of Rights was based from City Hall because his statue ‘offends’ sensitive ‘woke’ ( not a real word)

Yes, he owned slaves. Yes, he was a hypocrite. Yes, he was profligate. Yes, he was a flawed human being. However, without Thomas Jefferson and other flawed men ( because women had no agency until the 1970s), there would be no United States of America. There would have been no Declaration of Independence upon which the divorce from Britain was based. These men who traveled for weeks to meet in Philadelphia as the Continental Congress  to commit treason against the king, who knew they would be executed for treason if they lost, who tried to cobble together agreement among 13 individual states that were more akin to countries with disparate interests and cultures, who made painful compromises that do not withstand 20th and  21st Century moral scrutiny, still created the foundation upon which our country that now celebrates diversity and freedom was built.

Enough with the idiocy. Where else on this planet does anyone believe they would have the same rights, privileges, agency, freedoms, ability to rise from poverty to the presidency, the rank of Chairman of the Joint  Chiefs, to run a Fortune 500 company, to govern a state, to become a University professor, to create a multi million dollar business, to fly to the moon?

Why do people the world over want to risk death or imprisonment or deportation  to come to this country? It is because of the government formed by the flawed human beings such as Thomas Jefferson, George Washington, John Adams, Caesar Romney, and all of those individuals who risked life and limb to sign the Declaration of Independence.

America. Love it with all of its beauty and its flaws or leave it!

Posted by Vivian Harrington at 9:49 PM