Book Review: Into The Dark by Rick Mofina

Book Review: Into The Dark by Rick Mofina

Who is the stranger beside you? Is the neighbor across the fence that lives a seemingly ordinary life a serial killer? Is the noise you hear in this middle of the night just a noise? Or is somebody really there? Were is not for stories such as the BTK killer, a novel that poses questions like these might seem beyond belief.

As a survivor of childhood horrors and an abusive first marriage, psychologist Claire devotes her life to helping abused women. She has found her knight in shining armor- her new husband that saved her from a vicious attack. If only she were able to conceive a child her life would be complete.

But a cold case investigator, Joe Tanner, himself a grieving single father, is taking a new look at evidence from an unsolved murder discovers a clue that links several other unsolved murders. And the 10th anniversary of the first death is approaching. Is there a serial killer lurking in the shadows? Does one of Claire’s patients have something to fear? Who is the Dark Wind Killer?

I liked the plotting and the characters seemed genuine. Author Rick Mofina appears to appreciate how severely damaged people may seek to deny what is, rationalize irrational behavior, and try to believe in a fairytale.  The story is fast paced and I enjoyed the book immensely. I will certainly look for other books written by this author. 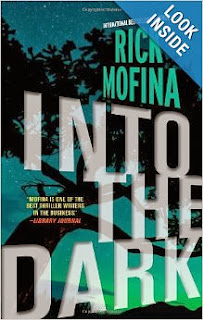 Posted by Vivian Harrington at 9:08 AM