Re-enactors Among Us~What Your Co-worker or Neighbor May Be Doing on the Weekend!

Re-enactors Among Us~What Your Co-worker May Be Doing on the Weekend!

Admittedly, I am part of the fringe. My husband and I are American Civil War living historians and re-enactors. We enjoy portraying people of the past and honoring our ancestors at the same time. But until I met my husband I’d heard vaguely of Civil War re-enactments but had no appreciation for the worlds that re-enactors and living historians inhabited. Since my initiation into the hobby, I’ve been assaulted with the knowledge and appreciation that historical and not – so – historical re-enacting is a worldwide phenomenon.

To the uninitiated I ‘m offering a basic guide to the world of re-enacting. Truly, the opportunities are endless. For the sake of simplicity, this episode will deal only with those re-enacting opportunities in the USA. Since I often muse on Civil War re-enactments, I have not included any additional information on that particular sub-culture.

1)        There are organizations that recreate the life of those who lived in Imperial Rome.
http://www.larp.com/legioxx/

2)        Regency reenactments in which people portray the world inhabited by those who appreciate Jane Austen and the lovely clothes and manner of the period from 1811 to 1820.
http://regencysa.blogspot.com

3)        For those who see romance and excitement in the medieval world, there is the Society for Creative Anachronisms. Members of SCA don clothing of the Middle Ages and Renaissance and attend events that include jousting tournaments, royal courts, feasts, and courtly dancing.
http://www.sca.org

4)        American Revolutionary War re-enactment afford those who love the gloriously elaborate costume and manners of late 18th Century America.
A benefit for those living on the East Coast is the proximity to Colonial Williamsburg. And the clothes are no much nicer that those of the Civil War era.
http://www.revwar.com

5)        While it is not as popular in the USA as the rousing War of the Roses re-enactments one finds in England, there is a US based organization that participates in War of the Roses re-enactments. Of course I’d much rather see the events in the U.K. where the parties utilize authentic weapons. But for those who are states bound and looking for the opportunity, contact:
http://www.rainasmind.com/

6)        The French & Indian War Society provides the opportunity for students of history to delve into this aspect of our history. One of the premier reenactments for this war is held at Fort Frederick in Maryland.
http://news.maryland.gov/dnr/2013/04/09/fort-frederick-to-host-french-and-indian-war-reenactments/

7)        Those interested in re-enacting the Great War – WWI – can find information here:
http://www.reenactor.net/forums/index.php/page,42.html

9)        WWII – re-enactments are extremely popular in the US. Many Civil War re-enactors also participate in WWI events. It is accessible history, still easy to find uniforms and paraphernalia, and the civilian clothing, music and material culture are easy for us to understand. Most of us know or know of a WWI veteran and can relate.
And, the guys like the guns and women can participate without wearing corsets!
http://www.501stpir.com/reenactingorgunits.html

10)      Finally for this installment, the re-enactors of the Napoleonic wars. The uniforms are awesome. The women’s civilian wear is beautiful. And the era has an aura of romanticism.
http://www.brigade-napoleon.org/

This is all well and good, but personally,  I prefer the shorter length dresses of
the 1830’s where the women can show a bit of décolletage and the mutton-chop
sleeves, while resembling Little Bo Peep just a bit, are charming. And, the shoes
of the 1830’s are pretty. If only….. 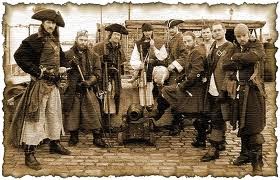 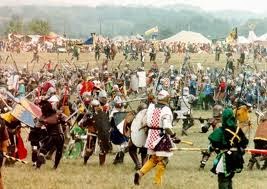 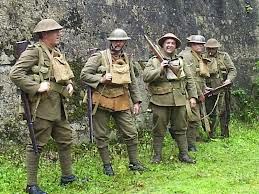 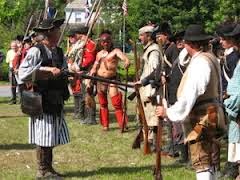 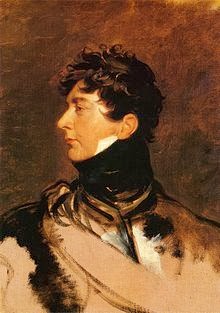 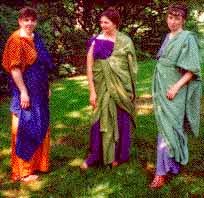 Posted by Vivian Harrington at 10:40 PM