To Really Reboot Washington, Vote Against EVERY INCUMBENT! 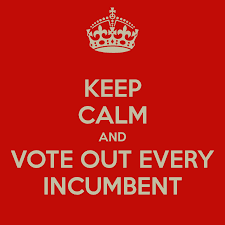 The American populace has decried for decades the deteriorating ethics of Washington insiders and members of Congress. There have been calls since at least the Reagan presidency to “throw the bums out”. But people only want to toss out the other guy’s bum – not his own. And partisan politics creates even greater challenges because many voters cannot bring themselves to vote for a member of the “other party”, no matter how much sense there may be in considering the candidate rather than a platform or ideology.

Clearly, the status quo is ineffectual.  Neither the Republicans nor the Democrats have taken the higher road in recent decades. Partisanship has caused gridlock, vitriol, critical deterioration of our infrastructure, disdain for all elected officials, government shutdowns, and voter apathy. 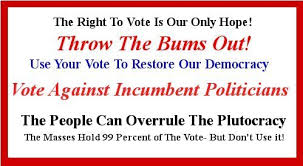 Super Pac money results in only the 1% funding elections. The status quo essentially curtails the ability of grass roots community candidates to find traction. Career politicians care only about listening to themselves talk on CNN, getting re-elected, and pandering to lobbyists.

The only way to completely reboot our republic is a wholesale sweep of the current members of congress. Vote against every incumbent no matter the party. Send a message that you are fed up with the machinations of the party machines. I harbor equal disdain for Mitch McConnell and Harry Reid.

Even newbies to our Congress are sucked into the vortex of corruptions, self -aggrandizing and hubris within months. The system perpetuates itself. 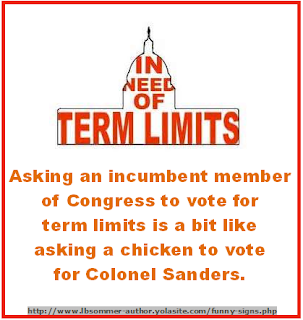 Look what happened in the Middle East when the people demanded change. We have the mechanism to change our government. Regretfully, we’ve gotten the representation we deserved – because we kept voting for our bums. 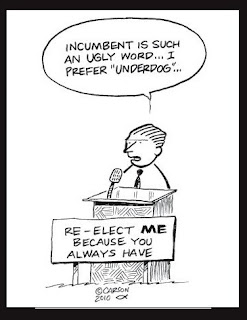 Posted by Vivian Harrington at 8:48 PM