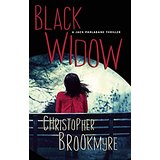 Black Widow is an intriguing mystery, a story that kept me guessing until nearly the end. After reading this novel set in Inverness, Scotland, I plan to read the earlier Jack Parlabane books. I'd not heard of Scottish author Christopher Brookmyre previously; however, I love his writing style, the character development, and the suspense. This book is truly a page-turner. Even the unlikeable characters are written with empathy.

In Black Widow discredited journalist Jack Parlabane is asked by the sister of Peter Elphingstone, a recently married man who died in a single vehicle auto accident, to investigate the circumstances.  She suspects his fairytale marriage to “Bladebitch” surgeon Diana Jager was fraught with disharmony.

There are numerous red herrings, twists, turns, and narrative told from the varying perspectives of the leading characters that create a truly fascinating read.

I had the good fortune to read this book courtesy of Netgally.com in exchange for an honest review. The book is set for release in the US on November 1, 2016.