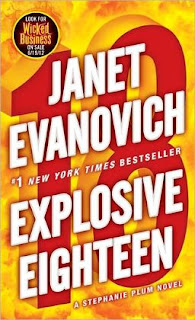 I love Stephanie Plum, the Jersey girl from the Berg who works as a bail bonds enforcer for her cousin Vinnie, and her coterie of eccentric friends, family members and FTAs (Failed To Appear).  Of the 18 books in the series, I’ve loved 16 of them. Both 16 and 17 seemed a bit stale to me and I hesitated about buying Explosive 18; but I’m glad I did.

While Explosive Eighteen may not be as fabulous as the earlier adventures, this book still made me laugh out loud.  I am bit bored by Stephanie’s indecision with regard to the two men in her life, Joe Morelli the sizzling cop and Ranger the mystery man who wears all black.  I mean really, pick one and move on.  But despite the retread plotlines, Evanovich’s Stephanie Plum series remains engaging. I enjoy the familiar characters that have come to feel like family- Grandma Mazur and her fascination with funeral home viewings, Lula the former ho’  with a passion for “Cluck in a Bucket” and donuts who accompanies Stephanie as she tries to capture the elusive and bizarre FTAs, and the ever faithful hamster, Rex.

In this episode, Stephanie has returned from a less than romantic vacation in Hawaii with an envelope that makes her the target of a couple of fake FBI agents, a terrorist, a grieving hairstylist and the real FBI.  As always, the story is improbable and the situations contrived with Stephanie and Lula botching attempts to bring in the crazy FTAs all while trying to avoid capture or worse by the bad guys in madcap ways that are reminiscent of movies from the Golden Age or an I Love Lucy episode.  I enjoyed the book.  It is funny. And despite my comments about the series, I know that I’ll be at the front of the line to buy the next installment because these are the only books that routinely cause me to laugh out loud. And that is priceless!

Posted by Vivian Harrington at 9:39 AM