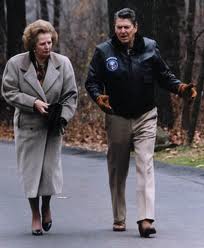 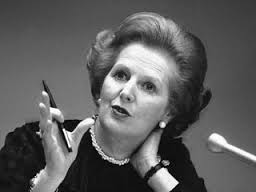 Baroness Margaret Thatcher, aka Maggie aka the Iron Lady died today at the age of 87. Thatcher is one of the great political figures of the 20th Century. No doubt she has reunited with her beloved husband Denis and her great friend, Ronald Reagan. The Iron Lady and the Gipper forged a political alliance and friendship that changed the western world culminating with the break up of the Soviet Union and the fall of the Berlin Wall.

Both Reagan and Thatcher came to power at a time of rampant inflation, high unemployment, and national identity crises. Maggie led the way with her staunch conservatism, iron will and policies that turned the tide in Britain. Thatcher busted the coal miner’s union. Reagan gutted PATCO, the Professional Air Traffic Controllers union. They slashed taxes and supported entrepreneurship, capitalism, private enterprise, & deregulation.

Maggie Thatcher, however, was also an icon for women the world over. She was the longest serving British prime minister of the 20th Century and also the only woman ever to have held that position. For those women coming of age in the late 70’s, she exhibited what strength of character and hard work could accomplish. Pundits today tend to view Thatcher through the lens of 21st Century eyes and sensibilities. But in 1979 when Thatcher became prime minister of Britain, it was exceedingly rare for a woman to accede to such a position of authority and power. She paved the way. And to achieve such political success from humble beginnings was unheard of in Britain. Positions of power were usually reserved for the affluent, well born, politically connected class. Thatcher was none of those. She was a grocer’s daughter from a small town in Lincolnshire. Grantham, England was at one time voted the most boring place in the country. Having spent nearly a year outside of Grantham from the autumn of 1978 to the summer of 1979 while at university, I can attest to the simplicity of the town. Thatcher rose from humble beginnings on her strength of character, will and intelligence to lead the Conservative party to victory at a time when socialism was tearing the country to shreds.

Regardless of how one views her political policies from today’s perspective, in her time she was respected the world over. She always elicited strong feelings from her supporter and her detractors. News outlets today showed irreverent photographs of her detractors celebrating her death.  But I mourn her death for the loss to the world of a larger than life woman who left her mark on our world.

Rest in peace, Maggie!
Posted by Vivian Harrington at 8:28 PM