There are some hairstyles that are so unfortunate they should be banned! Among those heinous examples of retro looks, the mullet ranks at the top along with the rattail, the dumb looking wedge / bowl look sported by little boys in the 1980’s, the bouffant, the beehive, the poodle perm, lacquered mall bangs, and anything that requires teasing.

A mullet makes anybody who sports the look resemble a redneck caught in a time warp.   While it may be patently unfair and stereotypical, a man or a woman sporting a mullet conjures up the images of pick up trucks with imitation male anatomy parts hanging from the trailer hitch, bad country music or un-groomed rock musicians, cheesy pick up lines, gold chains, and window stickers of little boys peeing.

So, seeing the guy wearing a mullet acting rather strangely at Martins in Winchester, Virginia this evening – I was distracted.  I saw him several times as I shopped. He played with the food at the salad bar; wondered around aimlessly as if looking for a person to abduct, stared at the game for picking up stuffed animals with a tong, perused the Redbox movies, and left with only a token item.  As I was wheeling my cart to the parking lot I noticed him walking to his car – a vehicle that fit the persona to a T. After I put my groceries in the trunk and pushed the cart to the corral, I had to check the plate.  It was as I suspected.  He was not from  Northern Virginia. 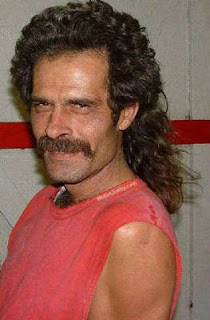 Posted by Vivian Harrington at 9:22 PM