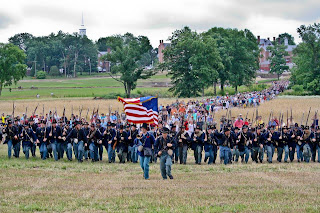 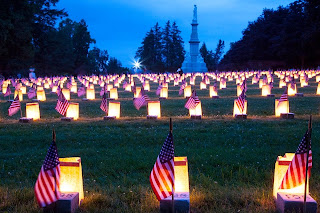 Our collective remembrance of the 3-day battle of Gettysburg on the 150th anniversary has now is now a part of history. As with any commemoration of a significant historical event, there were highs and lows, good and bad, ugly and “ you’ve got to be kidding me!”

From a positive perspective, I find it encouraging that so many citizens of the world traveled to Gettysburg, Pennsylvania to honor the past, remember the tragedy that was, and to walk in the footsteps of those who fought and gave their all for their beliefs.

The National Park Service afforded the opportunity for scores of living historians to march the same paths taken by the original actors, followed by crowds of spectators.  It makes my heart sing to know there are those among us who still care so fervently about our history.

The event also gave insight into how this schism in the American experiment has resonated with those throughout the world. We met re-enactors from England, Ireland, Scotland, Australia, Canada, Italy, France, Germany and Belgium.  When asked why they came to America for this reenactment, I was told that more than 45,000 English immigrants fought in the American Civil War. Many more German immigrants served. I learned there is a vigorous interest in Civil War reenacting in Poland and the Czech Republic.

My husband and I met a delightful woman who had brought her two young sons from Singapore to attend a reenactment because they were studying American history in school.

We photographed a young marine who had just that afternoon been promoted to sergeant and received orders to be at Quantico for deployment the next morning to ship out.  And we had the pleasure to make images of the charming French contingent that included the lovely Annabelle who was wearing a royal blue multi tiered confection of a dress she’d copied from a French fashion magazine of the period. The exquisite dress consisted of 14 meters of silk fabric and she told me she’d make the dress without a pattern.

But the best moments involved the friendships among the wet plate photographers.  John Coffer came to the BGA event to make images for himself. My husband Todd Harrington and his colleagues Bob Szabo and Del Hilbert helped one another with trouble shooting problems with the 19th Century chemistry and technology, shared experiences, chemicals, and offered to help with any little thing.  We laughing referred to the Photographers Guild as if we were living in Renaissance Florence!

Next edition – either bad, ugly or worse…..depends upon my frame of mind.