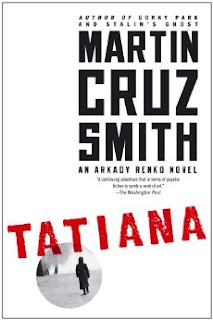 Martin Cruz Smith’s Russian investigator Arkady Renko first pulled me into his world with 1981’s Gorky Park. With subsequent books Cruz Smith brought the reader further into the psyche of Renko, a relentless, buck-the system-pessimist filled with melancholy that squandered his rise to the top of the militsiya because of  his dogged pursuit of justice. This has never set well with his superiors.

While Tatiana may not rise to the excellence of Gorky Park, it is none-the-less a solid effort and a good read.  To his credit, Martin Cruz Smith has not churned out Arkady Renko novels on an annual basis, which has kept me wanting more.

With other series that began with intriguing characters, the annual installations by authors seeking to capitalize on the franchise resorted to diluted, formulaic plots that left me cold. Not so with Martin Cruz Smith and Investigator Renko.
Renko has evolved and survived through the Soviet era, the end of the Cold War, Détente, and the rise of capitalistic criminal enterprises.  Despite his being an American born author, his research is superb and I always feel as though Cruz Smith is at heart, a Russian.

Tatiana brings us an older, wiser, sadder, Renko who is walking around with a bullet in his head. Despite the official determination that a famous investigative journalist has committed suicide, Renko believes otherwise and decides to investigate under the guise of looking for her body, which has disappeared or been misplaced.  This is a mystery involving international intrigue, wealthy Russian and Chechen gangsters, a look into the amber industry, and the danger to journalists seeking to expose wrongs. It is current. It is relevant. It is Cruz Smith at close to his best. Highly recommended.
Posted by Vivian Harrington at 9:06 PM