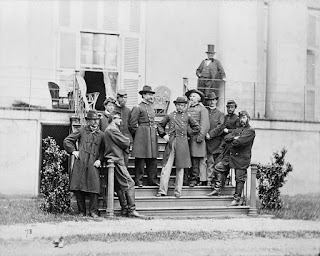 My husband and I had the distinct privilege of working with the Museum of the Confederacy in Richmond, Virginia this past weekend for a photographic seminar on photography during the Civil War. Afterwards, Todd made wet plate collodion images of the seminar group and visitors to the museum.

The museum is in downtown Richmond and is surrounded by and dwarfed by the Medical College of Virginia. This cultural institution houses an amazing collection of Civil War treasures. And the White House alone, which is a National Historic Landmark, is worth a trip to Richmond.

The house, which served as the executive mansion of Jefferson Davis, has a fascinating history and has been restored to its former glory thanks to the meticulous research and attention to detail of its curators. I was privileged to experience a private tour and can state, without a doubt, that the winding staircase that leads to the second floor is among the most magnificent I’ve ever seen. Fortunately, I was appropriately attired as a lady of the Confederacy in a summer sheer dress and felt elegant as my caged skirts swayed as I descended those beautiful stairs. Okay, I lust for that staircase!

The mansion also houses both of Jefferson Davis’s desks, an beautiful custom crafted bookcase he ordered from England but never saw because a federal blockade intercepted it, and a collection of gas chandeliers that make my heart sing. Ah, Sweet Mystery of Life at Last I’ve Found You! [Congrats to fans of “Young Frankenstein “who get the reference]

For any student of Civil War history, the Museum of the Confederacy and White House is a must see. And the museum as now opened a branch at Appomattox!
Posted by Vivian Harrington at 10:01 PM