Gettysburg: Turning Point of the Civil War by TIME Includes My Husband’s Photographs in the Chapter titled: Gettysburg: In the Footsteps of Matthew Brady~ ;

Gettysburg: Turning Point of the Civil War by TIME Includes My Husband’s Photographs in the Chapter titled: Gettysburg: In the Footsteps of Matthew Brady~

150 years ago today, July 1, 1863, the first day of what would be three days of battle in and around the town of Gettysburg, Pennsylvania took place. There is no war or conflict that resonates in the very souls of Americans than the Civil War and no battle that calls to mind the sacrifice of so many than Gettysburg. The three-day battle resulted in more than 51,000 casualties.

Civil War historians have well studied the photographs taken by Gardner for Matthew Brady’s studio after the battle of Gettysburg and determined that some of the more famous images were, in fact, staged.

In any event, the images made by Gardner after the battles of Antietam and Gettysburg sent shockwaves through the nation. Never before had such grisly images of battlefield dead been depicted and share with the general public. Unlike the heroic paintings of the Napoleonic wars, the American Revolution and French Revolution, these images clearly showed the horror of battle and the agony of death on the battlefield – the bloated, twisted bodies.

TIME contacted my talented husband, Todd Harrington, to recreate images made by Gardner of the same sites from the same perspectives contrasting those of July 1863 with today’s Gettysburg in 2013.

I recommend the book most heartily not only because the hard cover edition celebrates the talent of my beloved spouse, but also because it is a fine commemoration of one of the most heart rending moments in our history.

It is the last bit of the Gettysburg address that really resonates:
“It is rather for us to be here dedicated to the great task
remaining before us -- that from these honored dead we
take increased devotion to that cause for which they gave
the last full measure of devotion -- that we here highly
resolve that these dead shall not have died in vain –
that this nation, under God, shall have a new birth of
freedom -- and that government of the people, by the
people, for the people, shall not perish from the earth.
We Americans have a duty to remember & to honor those who have come before us and fought for what they believed.  My husband had ancestors that fought and died for the Confederacy at Gettysburg. I had ancestors that found on both sides – brother against brother. When we look at this war and battle through the prism of 21st Century sensibility we judge some harshly. But that is a disservice to those who fought for state or country with the views of time and place. Context is the key.  We have a duty to place all things in history within its context and to not judge harshly those who came before, no matter how we may disagree with the beliefs and actions of the past.

Kudos to TIME for publishing this lovely commemorative book and for having the wisdom to utilize the talents of my wonderful husband to show the differences between Gettysburg then and now. But – it is only in the HARD COPY EDITION! 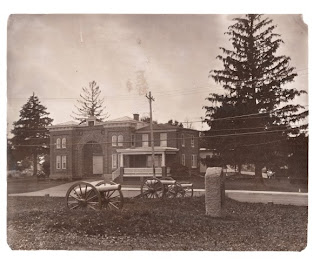 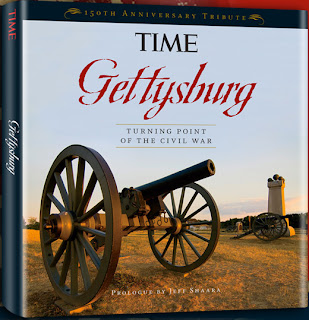 Posted by Vivian Harrington at 9:47 PM