It seems to me that for many Americans, Friday, September 11, 2015 is just another day. Sure, there are some news articles recalling the horror of the terrorist attacks on the World Trade Center and Pentagon and the valor of those rescue workers who died in the line of duty squeezed between stories about Serena Williams losing her bid for a grand slam or the impending increase in Metro fares or the Pope’s impending visit causing traffic congestion.  But this is not enough. 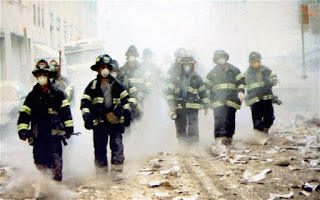 What happened to the collective promise of the American public to never forget that terrorists attacked us on American soil, flew planes into the landmark twin towers and the Pentagon – the heart of our military and caused the immediate deaths of 2977 people?   Should we not collectively recall the bravery of the passengers and crew who stormed the cockpit of Flight 93 in Shanksville, Pennsylvania to prevent an attack on another unknown landmark?  “Let’s roll” still sends shivers down my spine.

It is impossible to forget the sights and sounds of 200 people jumping from the tops floors of the trade center towers to certain death to avoid burning to death.

I cannot forget seeing the hole in the Pentagon, the symbol of our military might, as I crossed the Potomac River into Virginia from Washington, DC, and thinking of the 52 military personnel and 70 civilians killed or the horrible burns suffered by survivors.

I will not allow myself to forget the gut wrenching horror that for a brief time caused the civilized world to shout “Je suis Americain!”

And I cannot forget a few weeks later walking with my college roommate through her neighborhood in Pelham, New York as she pointed out all of her neighbors who had lost loved ones in the attacks.

And these heroes are still dying by the hundreds from 9/11 related cancers. We owe them our memories.  We owe ourselves vigilance. Those who forget the past are destined to repeat it.
Posted by Vivian Harrington at 7:49 PM